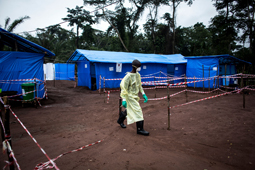 (FILES) In this file photo taken on June 13, 2017 Health workers work at an Ebola quarantine unit in Muma, after a one case of Ebola was confirmed in their village.
The World Health Organisation (WHO) announced on May 11, 2018 that is was preparing for a’worst case scenario’ in DR Congo Ebola outbreak. / AFP PHOTO / JOHN WESSELS