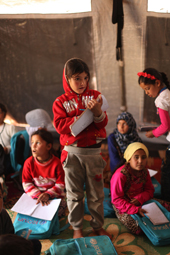 A picture taken on April 30, 2018 in a camp for displaced Syrians from villages and towns around Abu Duhur on the edge of the southern Idlib province, shows children siting next to school bags provided by the UNICEF as they attend classes provided by local teachers to some 300 boys and girls at the camp on the outskirts of the city of Sarmada in northern Idlib.
Several weeks of deadly fighting between Syrian government forces and rebels allowed the regime to take control of some 400 villages and towns, as well as the military airport of Abu Duhur last month. / AFP PHOTO / Amer ALHAMWE